By: Michael Mackenzie and Elizabeth Stanton

The bond market on Wednesday shifted to price in a half-point rate cut in the Federal Reserve’s benchmark rate at some point in 2023, as traders upped their bets on a US recession eventually halting the central bank’s aggressive tightening campaign.

Market expectations for inflation also nosedived alongside gasoline prices, while pain in stock markets also fueled appetite for Treasuries, weighing on rates across the curve.

Swap contracts that reference central bank policy meetings next year showed traders expecting a rate of close to 3.08% by December, more than half a percentage point below the market-implied peak of 3.62% in March. That shift in positioning beyond this year was echoed with an inversion of 50 basis points between three-month Eurodollar interest rate futures contracts for December 2022 and December 2023. 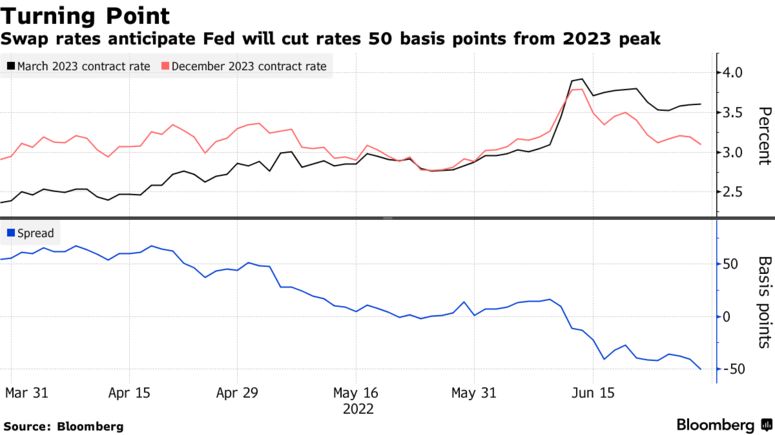 Market activity around the likely peak in the Fed policy rate and how quickly cuts to the benchmark might follow has increased in recent weeks. The moves have come amid a deterioration in consumer sentiment and fear that the fallout from higher food and energy costs might spur an economic slump. US rates swung sharply lower in the middle of this month as traders downgraded their assessments for where the Fed benchmark might peak from more the 4%, and expectations for potential cuts beyond that horizon have also amped up.

“We had thought the terminal rate would be volatile and that has been the case,” said Gregory Faranello, Head of US Rates Trading & Strategy at AmeriVet Securities. “I don’t think we can know where the Fed stops.”

Yields on Treasury notes and bonds were lower by around 5-to-8 basis points across the curve late in New York, with the five-year nominal rate leading the way and dropping as low as 3.15%. The so-called breakeven rate on five-year Treasury inflation-protected securities, a measure that’s seen as a proxy for consumer-price index expectations, dropped as much as 14 basis points to 2.61%.

Fed Chair Jerome Powell reiterated on Wednesday that the central bank is raising rates “expeditiously” and aims to move “into restrictive territory fairly quickly,” a level where borrowing costs restrain rather than spur economic growth. Powell also expressed faith the economy would avoid recession and warned that failing to address high inflation and allowing it to become persistent, would be a more painful outcome for the economy.

Quarter-end is anticipated to cause rebalancing flows into bonds with Wells Fargo & Co. estimated that around $5 billion will be added to the asset class, with most of the flows occurring Wednesday and Thursday.