Negative trade headlines, which have caused chaos with the markets at times over the last two years, have seemed to lose their ability to knock the stock market down lately as it marches to records. Investors pointed to a number of reasons why this market just seems to want to go higher as it ends 2019.

Just on Tuesday, President Donald Trump threatened to raise tariffs even higher if there’s no deal with China. The S&P dipped slightly and then came immediately back. On Monday, CNBC’s Eunice Yoon reported that Chinese officials were pessimistic about a trade deal. Stocks opened the day lower but then eked out record highs before the close.

Among the reasons cited for the market tail wind in the face of fragile trade negotiations are investor year-end positioning and adjustments made by companies to deal with tariffs if they remain. The economic impact of the existing tariffs have also been more limited than initially feared.

“The reason this market continues to rally is that nobody is selling,” said Matt Maley, chief market strategist at Miller Tabak, in a note. “This is especially true for institutional investors. It has been a great year so they cannot afford to take any chips off the table as we move into the last six weeks of the year.”

In other words, with the S&P 500 up nearly 25%, professional investors don’t want to be the ones that sell early and then have to explain to clients why they missed out on a potentially historic year of gains. The benchmark is on pace for its biggest annual gain since 2013, when it surged nearly 30%.

It’s been a slow march upward. Wall Street’s recent climb to record highs has mostly come through small gains at a time. The S&P 500 has recorded just two advances of at least 1% since Oct. 11. In that time, the index has posted 14 gains of less than 0.6%.

Stocks haven’t had any meaningful pullback over that time period either. The S&P 500 has fallen nine times since Oct. 11, with none of those moves even reaching the 0.4% mark.

The U.S.-China trade war has been going on since last year, leaving companies scrambling to adjust to the tighter trade conditions and issuing warnings about the conflict’s impact on their bottom lines. But talk around trade from companies has fallen off.

FactSet data shows S&P 500 companies discussing tariffs in the third quarter fell by 29% from the second quarter. On a year-over-year basis, that number dropped by 25%. This could be a sign that corporate America has grown more comfortable with tariffs staying at current levels, which could be translating into improving market sentiment around U.S.-China trade. 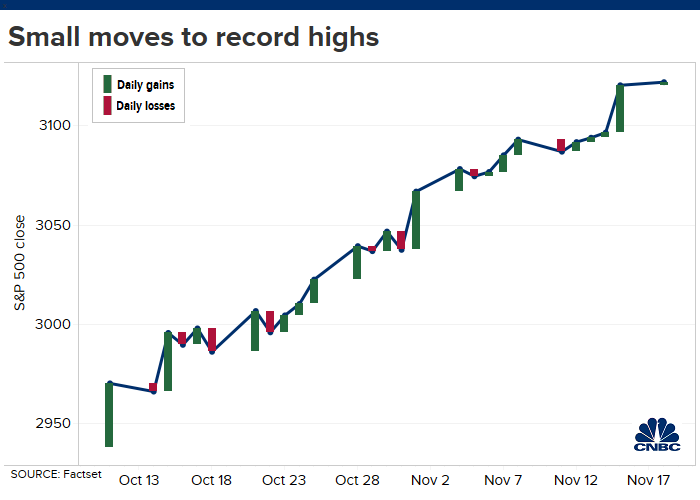 Jeff Mills, chief investment officer at Bryn Mawr Trust, said there was so much negativity priced in around trade in the market, “whereas now, you’re starting to see the initial signs of optimism finding their way into the marketplace.”

“I don’t think we’re anywhere near the point of euphoria but I do think that negative sentiment is less of a market asset than maybe it was a month ago,” Mills said.

China hurting more from trade war than US

The trade war has taken its toll on both the U.S. and Chinese economies over the past year, but more so on China, according to Goldman Sachs.

Jan Hatzius, the bank’s chief U.S. economist, told clients in a note Monday that the trade war is shaving between 0.7% and 0.8% from the Chinese economy, slightly more than in the U.S. He added, however, that the economic drag from the trade war should “gradually fade” in 2020 as tariffs have “have likely peaked.”

Still hopes for a deal

To be sure, a good chunk of the market’s rally to all-time highs comes from optimism about some sort of trade deal being struck by both sides. On Oct. 11 Trump said China and the U.S. had reached a “phase one” trade agreement that will be signed sometime this month.

Not much more upside in markets for 2019, says portfolio manager

Mills of Bryn Mawr Trust said the recent negative headlines around trade are not enough to dissuade investors from thinking that’s the base-case scenario. However, “once the market starts pricing in good news, it does become more vulnerable to any given tweet.”

At the same time, Treasury yields have fallen off since the start of last week after ripping higher in mid-October. The benchmark 10-year Treasury yield is down to around 1.8% from about 1.95% on Nov. 11.

“The bond market is clearly hedging but the stock market, you wonder if it’s saying to a certain extent that it’s all good either way,” said Gregory Faranello, head of U.S. rates trading at AmeriVet Securities. “If a China deal doesn’t get done, then maybe the Fed comes back and eases more and provides more liquidity. I hope the stock market is not going up on that premise.”

CNBC’s Jeff Cox and Michael Bloom contributed to this report.