Stocks rose sharply in wild trading on Tuesday as investors weighed the prospects of fiscal stimulus to curb slower economic growth stemming from the coronavirus outbreak.?

Facebook, Amazon, Apple, Netflix and Google-parent Alphabet all rose more than 4.8%. JPMorgan Chase and Home Depot led the Dow higher, rising more than 7% each. Tech and financials were the best-performing sectors in the S&P 500, rising at least 6% each. Energy gained more than 4%. 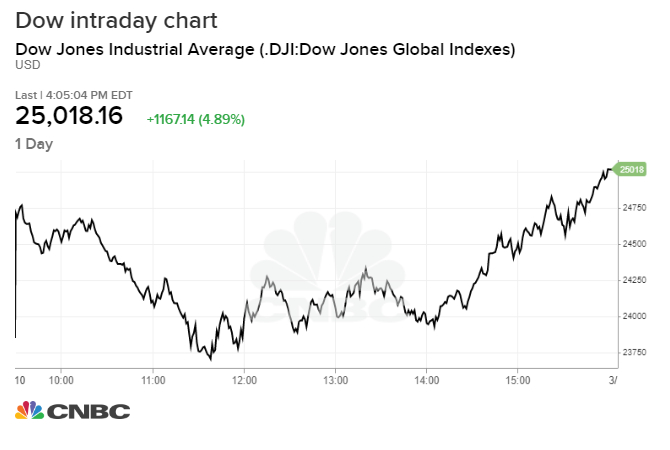 ?Fiscal stimulus is the antidote that can?bridge the gap between what was happening before coronavirus and what will happen after it,? said Brent Schutte,?chief investment strategist for Northwestern Mutual Wealth Management. ?It certainly can?t cure the virus, but it can help contain some of the economic fallout.?

?Today?s trading activity is the market trying to gauge whether the stimulus is going to be sufficient,? he said.?

President Donald Trump floated on Monday the idea of ?a?payroll tax cut or relief??to offset the negative impact from the coronavirus.?The potential tax incentives come on top of an $8.3 billion spending package Trump signed last week. However,?administration officials told CNBC?that the White House is not close to rolling out specific proposals to deal with a coronavirus-induced economic slowdown. CNBC later learned Trump pitched a 0% payroll tax rate for the rest of 2020.

“While we believe that a fiscal stimulus package will be produced, the timing and scope remain uncertain,? said Ed Mills, Washington policy analyst at Raymond James, in a note. ?When asked about the potential for a fiscal package, some Republican leaders on the Hill signaled that they believe these actions to be premature and key Congressional Democrats arguing that there are more immediate priorities over tax cuts and plan to introduce their own package in coming days.?

The market suffered a historic sell-off on Monday, with the Dow and the S&P 500 plunging 7.8% and 7.6%, respectively, both posting their worst day since 2008. The Dow?s 2,013-point drop was also the biggest-ever point drop for the 30-stock average.

Meanwhile, oil prices saw some respite Tuesday. U.S.?West Texas Intermediate?crude futures were up 10.4% at $34.36 per barrel.

That came after a shocking all-out oil price war roiled markets already on edge about the economic fallout from the fast-spreading coronavirus. Oil posted its worst day since 1991, with the WTI plunging more than 24% Monday, after?Saudi Arabia slashed crude?selling prices for April following the collapse in OPEC talks.

Investors sought out on Monday safer assets amid additional fears that the coronavirus will disrupt global supply chains and tip the economy into a recession. The?yield on the benchmark 10-year Treasury note?dropped below 0.5%?for the first time ever, while the 30-year rate breached 1%. At one point early Monday, the 10-year slid to 0.318%.

?We have repriced across the board,? said Gregory Faranello, head of U.S. rates trading at AmeriVet Securities. ?Things have simply moved a lot. And we are not suggesting this move is over, yet comparisons to prior periods in time given the magnitude of the moves is understood but may be misleading.?

?CNBC?s Eustance Huang and Peter Schacknow contributed to this report.

Subscribe to?CNBC PRO?for exclusive insights and analysis, and live business day programming from around the world.

Correction: This story was revised to correct when Trump signed the $8.3 billion package. It was last week.