FAANGs Equities: Long in the Tooth

“If I could avoid a single stock, it would be the hottest stock in the hottest industry, the one that gets the most favorable publicity, the one that every investor hears about in the carpool or on the commuter train and succumbing to the social pressure, often buys.”

The big technology companies which make-up the FAANGs, specifically Facebook, Apple, Amazon, and Google are quickly becoming political lightning rods. The Trump administration is ratcheting up the scrutiny on these tech bellwethers in recent years and so is Congress. Above all, recent announcements from the House of Representatives, State AGs (attorney generals) and federal regulatory agencies are likely a response to populist pressure from the right and the left, including many of the Democratic party candidates on the campaign trail.

As the Democratic primaries move into full swing this summer, expect this rhetoric to climax and force policymakers into more action. The most vulnerable FAANGs are Alphabet (GOOGL), due to alleged abuse of its massive market share in internet searches, and Facebook (FB), because of its privacy breaches and recent high-publicity drive for expansion. As a result, expect downward pressure on FAANG earnings multiples and believe that market equity capital, which is still highly concentrated in the FAANGs, will disperse into other companies and sectors. Telecom and small capitalization equities are the primary beneficiaries of this colossal coming migration.

As the S&P 500 has marched onto new highs, she’s done so without the stellar leadership of the FAANGs. Breadth is very weak relative to the overall equity market. Last week, the percentage of Nasdaq stocks above their 50-day moving averages was less than 55%. When equities were at their highs in April and October, this number was above 70%. We’re looking at one very tired bull. 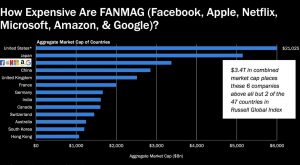 Despite the disparity in the above graph, it is important not to forget that G10 countries are highly levered and desperate for new, lucrative tax revenue sources. Over the last decade, debt to GDP across the developed world has surged from an average of 68% to 112%, per Bloomberg data. Politicians have made boatloads of mathematically unsustainable promises to voters and they need an escape route, an effective blame game. In the U.S., real GDP expansion this year tracking near 1.5%, per the New York Fed. Ugly data jumping out of the USDebtClock.org website points to U.S. unfunded liabilities near $130T — or 6x GDP. FAANGs are not only on the menu, but they’re also the main course. 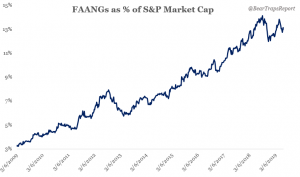 From just 3% of S&P market cap in 2009, the FAANGs have become 13% of the S&P 500. This is a nearly unprecedented concentration of capital in just five stocks.

Last month, the Trump Administration divided jurisdiction between two regulatory agencies which will lead the anti-trust investigations into “big tech”. The Federal Trade Commission (FTC) has been tasked with the responsibility to lead investigations into Amazon (AMZN) and Facebook (FB), while jurisdiction over Google (GOOG) and Apple (AAPL) has been handed over to the Department of Justice. According to ACG Analytics, the biggest priorities for investigators are Google and Facebook.

After a months-long investigation, the Department of Justice filed suit against the company in April of 1998. In June of 2000, a federal judge handed down a verdict to split the company up, though this decision was later reversed in September of 2001. During this purgatory draped in regulatory limbo, Microsoft suffered multiple downgrades and its stock price plunged more than 60%. In fact, it languished in “nowheresville” until 2011, at which point all remaining anti-trust controls on the company expired.

Looking down the road ahead, investors will continue their slow-motion flight out of the FAANGs into other growth (tech) stocks to reduce their exposure to unquantifiable regulatory risk. If only 10% of capital flows into low volume growth stocks, $340B of capital rotation will try to find a new home. A real catalyst will arrive when the Department of Justice and FTC officially announce their investigation proceedings against one or more FAANGs, which could happen even before the end of the year. We believe money will rotate into telecom (equipment) stocks as they offer meaningful liquidity and 5G provides a growth catalyst alternative to the FAANGs. Of all the mega-cap FAANGs, Apple is most insulated from all this risk due to its valuation, which is cheap relative to the FAANG space. As the political risk plays out, we expect Apple to outperform the other FAANGs.

Populists are driving the anti-FAANG sentiment, with Democratic Presidential candidate and Senator Elizabeth Warren saying: “Today’s big tech companies have too much power over our economy, our society, and our democracy. They’ve bulldozed competition, used our private information for profit, and tilted the playing field against us. My administration will make big, structural changes to the tech sector to promote more competition ‘including breaking up Amazon, Facebook, and Google’ Bernie Sanders and Tusi Gabbard have outright endorsed the Warren proposal, while every other major Democratic candidate has endorsed at least “looking into it”. Even the establishment candidate Joe Biden has said that there’s “a very strong case” for breaking up “big tech” companies, specifically Facebook. President Trump’s administration, of course, initiated the legal action against the big tech companies. With populist pressure pushing in from both sides of the aisle, FAANG equities look to get suffocated.