Historic Volatility Gap in U.S. Rates Has Traders on Tenterhooks

The great bond selloff may have eased this week at long last, but a Treasury fear gauge is sending a clear message: Not since the global financial crisis have two-year Treasuries been laced with volatility risk like this.

In a week marked by haven demand on Russia-Ukraine tensions and easing bets on an outsized interest-rate hike by the Federal Reserve, options traders pared back expectations on how much interest rates will move around.

The implied volatility for short-term securities declined from dizzying highs but it remains well above its counterpart for long-dated rates — leaving the relative gap close to 2009-era extremes.

“It means there is more uncertainty around policy rates,” said Nancy Davis, chief investment officer at Quadratic Capital Management. “It’s a crazy time. Vol has a lot room to run.”

Elevated volatility is causing liquidity erosion in the Treasury market, where the Bloomberg U.S. Government Securities Liquidity Index — a gauge of deviations in yields from a fair-value model — is approaching last year’s highs. 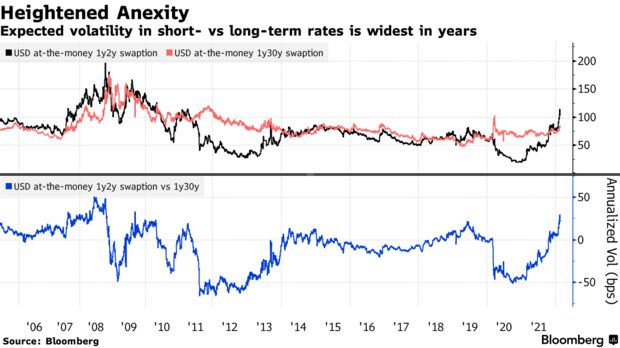 In the coming week, U.S. short-term rates face a supply test in the form of the monthly two-year note auction on Tuesday. It appears likely to draw a yield of about 1.50%, the highest since December 2019. The January auction drew 0.99%, and an increase of that magnitude hasn’t occurred since 2004. The U.S. week begins Tuesday after Monday’s holiday, leaving dealers less time to prepare for the sale.

Longer-dated Treasury rates were relatively stable last week, though the 10-year ended back below 2%. Yields across the curve remain at or near the highest levels of the past two years, with the Fed expected to begin a series of rate increases to curb the highest inflation rates in a generation. The expectation implied by interest-rate futures prices has risen to six quarter-point increases this year, up from three at the start of the year.

“I think this is a pause right here as markets have priced in a lot in a very short period of time,” said Gregory Faranello, Head of U.S. Rates Trading & Strategy for AmeriVet Securities. “On the geopolitical side, it just throws another wrench into the equation,” he said.

The minutes of the Fed’s last policy meeting, released Feb. 16, didn’t rule out a half-point rate increase, and the next meeting is in mid-March.

Investors are doubtful, however, that the Fed can rein in inflation without causing a recession. The past week’s shifts steepened the Treasury yield curve between two and 10 years for only the second time this year, and between five and 30 years for the first time. The spreads remain near the lowest levels in more than a year. Meanwhile futures have started to price in the possibility of a rate cut by 2024.

“The market is just faced with a lot of uncertainty right now,” said Tom di Galoma, managing director of government trading and strategy at Seaport Global. “That has put institutional investors a little bit on hold.”