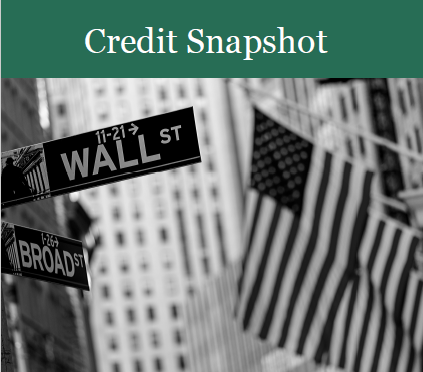 The credit markets continued to be solid, with secondary paper dominating client activity and spreads closing tighter for the third straight month. The new issue market slowed dramatically in July after a torrid pace since mid- March. Much like June, July continued social distancing and saw an economy that is still trying to re-open at the state level, but spikes in the coronavirus have hindered re-openings.

July saw credit spreads continue the move tighter while the new issue Investment Grade Credit market priced just $64.345 billion falling well short of the month’s expectations of $90-100 billion. This month we also saw massive secondary activity with net client buying of over $7.2 billion as cash chased secondary paper. We have seen unprecedented support from the Fed in the form of monetary and fiscal stimulus programs that have greatly impacted the credit backdrop and have given confidence to fixed income investors to buy credit.

Investor demand for high-grade bonds remains insatiable since the Fed’s announcement to support the credit markets. The strong demand continues to translate into strong pricing leverage for issuers. The announcement by the Fed in late June to buy individual corporate bonds put a charge in the market and fueled the net client buying that we saw for the month of July.

Fed Chairman Powell had some strong words this past week, following the recent Fed meeting;  pledging to do “whatever it takes, for as long as it takes,” pretty much sums up how the Fed is looking at the virus, the economy, unemployment and inflation, and how they plan to attack all of these issues.

IG credit spreads were 5-35 basis points tighter following a solid spread performance this month Spring was a roller coaster ride for credit as spreads were trading at the YTD tights in mid-Feb, as the coronavirus started to impact the market spreads and was pushed out to the wides in mid-to-late March. They went on a full rip tighter in April, that had spreads 50 to 100 basis points tighter. May, June and July’s push tighter had spreads at or approaching pre-coronavirus levels and July’s spread tightening brought massive net client buying. 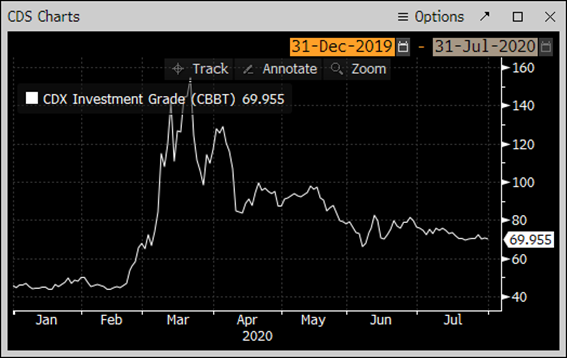 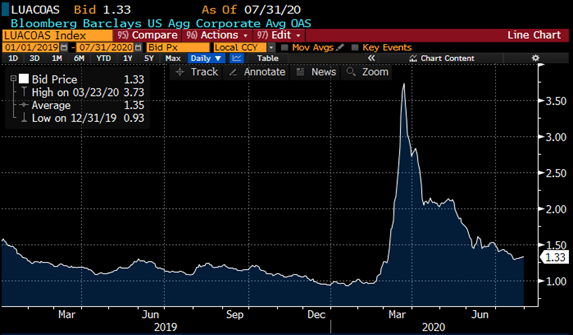 Demand for credit in July was massive, following the Fed’s announcement in late June, that they will be buying individual corporate bonds. This fueled a massive buy program from accounts to the tune of $9.303 billion of net client buying in July vs June, that came in at $1.601 billion.

So far, we have seen strong flows in secondary credit, tighter spreads, massive net client buying, a lighter than expected new issue calendar and a solid credit backdrop; yet uncertainty still remains for the economy and unemployment as coronavirus cases are spiking in a many states.

The Fed’s programs are working and are in full swing, as credit markets are now at, or approaching pre-coronavirus levels. While health concerns remain and have the markets on high alert with potential volatility, credit had a solid month as hopes for a vaccine appears to be in the future, as a number of pharma companies enter the third phase of clinical trials.

Still, the long-term ramifications of the coronavirus remain a big unknown for the U.S. and global economies. July’s monthly new issue volume totaled just $64.345 billion, well below the expectation of $90-100 billion. Since March 17, over $984 billion has priced with 2020 supply on pace to comfortably shatter 2017’s $1.3 trillion record.

The Fed has been the primary driver of big improvement in the credit landscape. Last month, they commenced the primary market credit facility, in addition to its already functioning secondary market corporate bond buying program, which pushed credit tighter.

As the month of July wrapped up, we saw strong earnings from the big six banks and tech companies, but health concerns and the economy still remain at the forefront of daily conversations. Spreads will take their que from any number of things weighing on the market, including unemployment benefits, China and U.S. tensions, coronavirus, earnings, jobs data, re-opening the economy and states and bringing kids back to school.

Whatever it is, there is plenty weighing on the market. We hope that congress gets their act together to extend unemployment benefits, as they are set to expire and both sides are far apart on principal in the midst of the biggest U.S. public health crisis in a century.

As the summer kicks into high gear for August, U.S. investment-grade borrowing costs are at all-time lows and we are expecting a busy few weeks to open the month, with new issue estimates calling for $25-30 billion next week and $50-60 billion as issuers take advantage of historically low funding costs and low coupon levels.