These are some of the investor expectations now that bond markets have taken another step toward pre-pandemic normality, with benchmark inflation-adjusted Treasury yields climbing above zero.

Back in positive territory for the first time in more than two years, the real yield move threatens to remove a key pillar of support for risk assets like stocks and credit and spark a reassessment of sovereign debt.

The yield on so-called 10-year TIPS rose above two basis points on Wednesday before pulling back, as traders continued to build bets on an aggressive series of rate hikes from the Federal Reserve.

Rising real rates, a crucial barometer of true interest costs for corporations, have come as traders raise their aggressive bets on policy tightening from the Federal Reserve and central banks around the world to combat still-hot inflation levels. 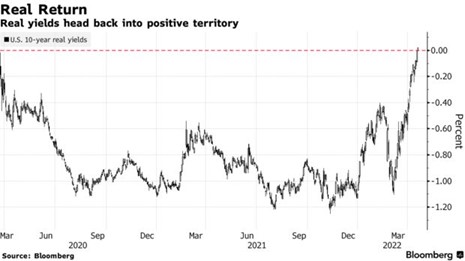 “We know the Fed’s transmission tool is real yields with relation to equities, credit and the U.S. dollar,” said Gregory Faranello, Head of U.S. Rates Trading and Strategy for AmeriVet Securities. “Part of the Fed’s toolkit lends itself to outsized rate hikes unlike the past rate cycle of 2015.”

The Fed is also double-barreling on policy normalization, signaling plans to shrink its portfolio at the rate of more than $1 trillion a year by not replacing securities as they mature.

“Real yields rising signal we’re progressing back to normality as central banks withdraw stimulus,” said Stephen Miller, investment consultant at GSFM, a unit of Canada’s CI Financial Corp. “It means we need to re-learn the first lesson of investing, that diversification is important.”

High-priced tech stocks are likely to be under the most pressure as the move undermines valuations — the climb in real yields played a role in pushing the Nasdaq 100 into a bear market earlier this year. 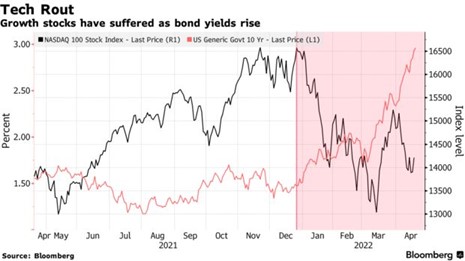 Shares in Taiwan and Korea — both tech-heavy bourses — look particularly vulnerable in Asia. Meanwhile, Southeast Asian equity indexes are benefiting from their skew toward value and commodity stocks, at a time the reopening of regional economies is helping.

Negative sentiment toward Treasuries could also shift if investors believe they are beginning to get an acceptable return. Years of negative real yields meant they were forced to pocket losses on government debt as central banks slashed interest rates to combat the effects of the pandemic.

“With a negative real yield, investors are faced with the realization that investing in Treasuries locks them into a negative return, after adjusting for inflation, so they move to riskier assets such as credit and equities,” said Todd Schubert, head of fixed-income research at Bank of Singapore. “If this reverses, the opposite holds.” 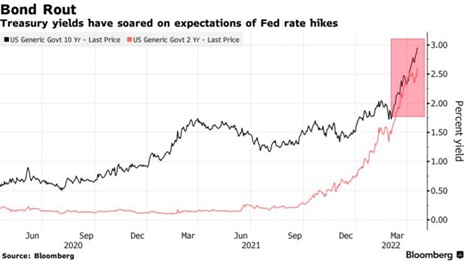 “I really do think the Fed will gaslight investors and get real yields up to tame inflation,” she said.

A Bloomberg gauge of dollar investment-grade corporate bonds has lost over 12% this year as yields have risen and spreads widened. It’s on track for the worst year ever, according to data going back to the 1970s. 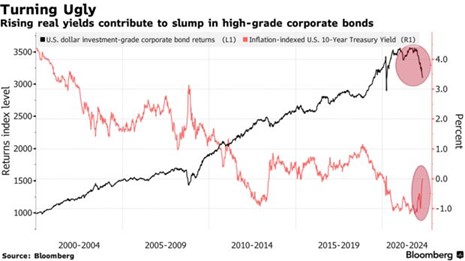 “Investors will start to face the risk of a ‘double whammy’ of much wider spreads and higher rates,” the Goldman team wrote.

The surge in real yields bodes well for the world’s reserve currency, which has risen alongside expectations of U.S. rate hikes to combat the hottest inflation in four decades. The greenback has strengthened against most Group-of-10 peers in the past month, with its advance clobbering peers like the yen, which has hit a 20-year low.

Demand for the dollar “underscores the significance of the era we are in -– true ‘lift off’ from zero interest rate policy has arrived, and the U.S. Federal Reserve is in control of that narrative,” said Brian Gould, head of trading at Capital.com in Sydney. 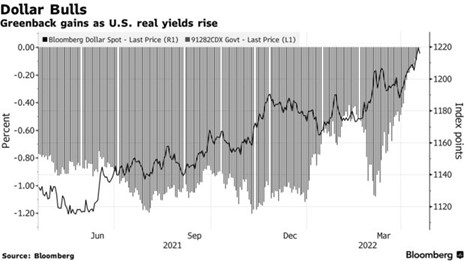 Still, a gentle climb in inflation-adjusted yields can also be interpreted as a bullish signal for economic growth — in this case a bet the Fed can engineer a much-debated soft landing.

Meanwhile, currencies of developing nations may find themselves among the biggest casualties. 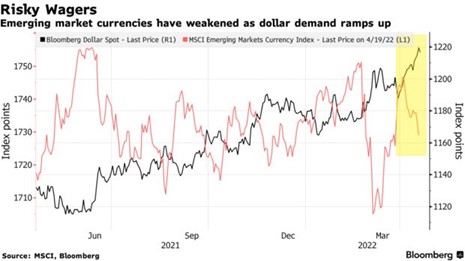 An MSCI gauge of emerging-market currencies has fallen 1% so far this month, with the Argentinian and Chilean pesos and the Hungarian forint among the top decliners. The equivalent equity index has dropped 11% this year, worse than the S&P 500 benchmark.

In Asia, the Taiwanese dollar and Malaysian ringgit are among the biggest losers.

“Rate hikes in Asia are still in the early stages so the differential in real yields favors the U.S. dollar at this point in time,” said Leonard Kwan, emerging markets fixed-income portfolio manager at T. Rowe Price Group, Inc. in Hong Kong.

— With assistance by Melissa Cheok, Finbarr Flynn, and Liz McCormick