For the week, the Dow and S&P 500 both gained at least 1.5% while the Nasdaq climbed 1.8%. Those gains came amid hopes that the world’s two largest economies could soon make substantial progress in de-escalating their protracted trade dispute.

China’s Ministry of Commerce said Thursday that Liu He, the country’s top trade negotiator, spoke by phone with U.S. Trade Representative Robert Lighthizer and Treasury Secretary Steven Mnuchin. They agreed to meet in early October for another round of negotiations, according to the Chinese Commerce Ministry. China insiders have also hinted that the upcoming trade talks could lead to a “breakthrough.”

“The fact that the major indices hit new five-week highs in a concerted fashion confirms the end of the August pullback, and barring another twist in the trade war, a larger scale rally is likely underway in the stock market,” said Ken Berman, founder of Gorilla Trades, in a note.

Hope of progress between China and the U.S. offset worries surrounding the economy.

The U.S. economy added 130,000 jobs in August, the Labor Department said Friday. This marked the third straight monthly slowdown in jobs growth. Economists polled by Dow Jones expected jobs to grow by 150,000 last month. Unemployment remained steady at a rate of 3.7% while wages grew more than expected. Wages expanded by 0.4% on a month-over-month basis and by 3.2% year over year. 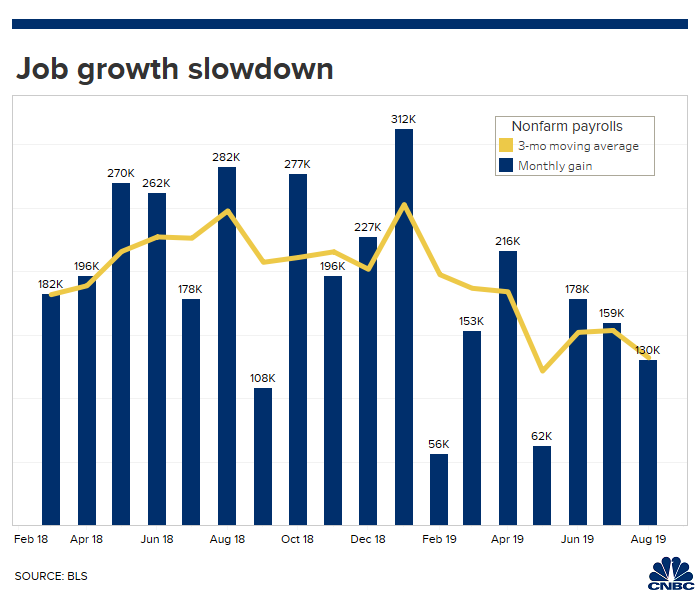 Treasury yields dipped from their session highs on the data. The 10-year Treasury yield slipped to 1.57% from around 1.6% earlier in the day.

“That payroll number was not great, but it’s not bad,” said Jeff Kravetz, regional investment director at U.S. Bank Wealth Management. “It probably keeps the Fed on track for a rate cut.”

Friday’s data and moves come as investors look for clues about the Federal Reserve’s next monetary policy move later this month. Market expectations for a 25 basis-point rate cut are at 91.2%, according the CME Group’s FedWatch tool.

Fed Chairman Jerome Powell said Friday the central bank will act as needed to sustain the current economic expansion, noting he does not expect the U.S. economy to fall into a recession.

Gregory Faranello, head of U.S. rates at AmeriVet Securities, said Powell’s comments do not change the market’s outlook for the September meeting. However, “should the data hold up for the remainder of 2019, it does raise the bar in the future for future easing.”

CNBC’s Spriha Srivastava and Sam Meredith contributed to this report.