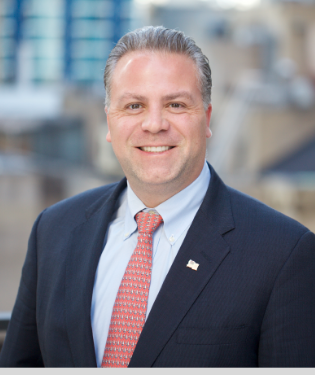 Patrick Perdue is the Co-head of Capital Markets, Fixed Income.

Patrick received his commission as an officer in the U.S. Navy, following graduation from the U.S. Naval Academy, entering the Naval Nuclear Power Program (Submarines).

Patrick attended Naval Nuclear Power Training School in Orlando, Florida and subsequently conducted his Nuclear Prototype training in Charleston, South Carolina. He had one last training stop at the U.S. Submarine Officer Training Program in Groton, Connecticut before being assigned to an operational submarine.

Following a nearly two-year training program, Patrick was assigned to the Gold Crew of the USS Maine, SSBN-741 in Kings Bay, Georgia. The USS Maine is an Ohio class missile submarine that was commissioned in 1995. She is the fourth U.S. Navy ship authorized, and the third commissioned, to be named in honor of the state of Maine. She has the capability to carry 24 nuclear armed Trident ballistic missiles. If one Ohio class submarine was considered as a stand-alone country, she would be a top 5 nuclear power when going to sea. Patrick held various positions aboard the USS Maine such as Damage Control Assistant, Nuclear Machinery Officer and Tactical System Officer. He earned his submarine officer qualifications pin “Dolphins” off the coast of Bermuda, took a swim at one of the deepest points in the world’s oceans and was a liaison to the Brazilian Navy during his last patrol. Patrick completed five strategic missile patrols during his duty on the USS Maine, and was awarded the Navy Achievement Medal and various deployment awards.

Following 9/11, Patrick extended his Navy duty and was selected to lead Navy Officer Recruiting and Navy Reserve Officer Training Corps Programs in the tristate area. As head of New York Officer Recruiting, Patrick and his team recruited doctors, nurses, lawyers, and line officers in New York and the surrounding areas. It was during this time that Patrick attended and received his master’s of business administration at NYU’s Stern School of Business.

Following graduation from NYU, Patrick spent the next 15 years in various investment banking and management roles at JPMorgan, Houlihan Lokey and most recently at Academy Securities, Inc., where he founded and ran the New York Debt Capital Markets group.

Patrick has raised over $2B in capital for operating businesses, with experience in advising companies of all sizes and lifecycle stages, from initial seed funding through Chapter 11, and other restructurings. Additionally, he is registered with FINRA Series 7, 63, 79, and 24.

In the last seven years, Patrick worked in senior management roles in four successful start ups in the financial, home services and airline industries. Patrick is on the board of Southern Airways Express Inc., which was a start-up airline in 2016 and currently has over 30 aircraft flying routes throughout the US and Hawaii.

Currently, he is one of the founding partners and Co-head of Capital Markets at AmeriVet Securities, Inc., a Service Disabled Veteran Owned investment bank, working out of the main office in New York City.

Patrick is an avid boater, golfer and snowboarder. He lives in Connecticut with his wife and two children.