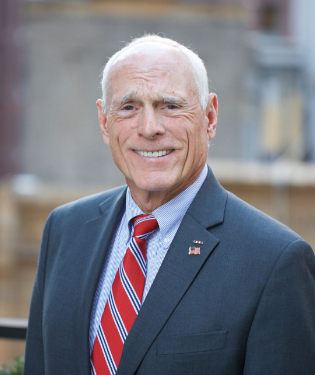 Robert (Bob) Jones serves as the President of AmeriVet Securities.

Bob graduated from the U.S. Military Academy at West Point and commissioned as a Second Lieutenant in the U.S. Air Force in 1965.

Upon completion of pilot training, Bob received his wings and deployed to Southeast Asia. There, he served with the 435th Tactical Fighter Squadron and flew the F-4 Phantom, accumulating more than 80 combat missions over North Vietnam and Laos.

On January 18, 1968, Bob’s plane was shot down, forcing him to eject over enemy territory where he was held as a Prisoner of War (POW) for 62 months. He was released during Operation Homecoming on March 14, 1973, after 1,882 days in captivity.

Bob continued to serve in the U.S. Air Force upon his return from Vietnam and promoted to the rank of Major three years early. His military awards and decorations include two Silver Stars, two Bronze Stars with the “V” device for valor in combat, two Purple Hearts, eight Air Medals the Legion of Merit and the POW medal.

In 1976, Bob joined American Airlines and flew several different types of aircraft over a 27-year period. In 1988, while flying with the airlines, he earned his law degree from the University of San Diego. Bob was a wide-body 777 International Captain flying routes to Europe and South America when he retired from American Airlines in 2003.

As a disabled veteran, he is a lifetime member of the Disabled Veterans of America, an organization that provides support for veterans and their families. He continuously leverages his broad knowledge and association with the U.S. military to give back to the veteran community.

Bob and his wife, Freya, have four children (two boys and two girls) and four grandchildren. In 2011, Bob and Freya moved from their home in Florida and relocated to the Big Island of Hawaii, where he feels both honored and privileged to be an American and live in our wonderful country.