In the dead quiet of a holiday week, the Treasury market could be signaling that interest rates could quickly start moving higher next year.

Treasury yields were bouncing along the curve Wednesday, with the benchmark 10-year Treasury yield rising to 1.55% from 1.48% the previous day. On Thursday, the 10-year backtracked slightly to 1.53%.

The move higher Wednesday coincided with a weak 7-year auction, and came after a retreat in recent weeks as traders weighed the threat of the omicron Covid-19 variant.

But as the new strain proves to be less severe than others, investors have shifted their focus to the Federal Reserve’s potential policy moves and their impact on the bond market. Earlier this year, the Fed said it would speed up the end of its bond buying program and could begin to hike interest rates in 2022.

“Next week starts a new year, and that starts a new thought process” for investors, National Alliance’s Andy Brenner said. He noted that the Fed’s move toward tightening will be the major focus including what the central bank may do with its balance sheet. “I think it’s going to be a move toward higher rates, and we’re going to see much higher rates than we saw in 2021.”

The Fed has said it would wind down its bond buying program by March, speeding up the tapering of its purchases. At that point, it could decide to start raising interest rates. Fed officials have forecast three rate hikes for 2022.

The Fed’s easy policies were instituted in early 2020 to fight the impact of the pandemic on the economy and financial markets. Since then, the Fed’s balance sheet has more than doubled to about $8.8 trillion.

The market is now also focused on what the Fed will do about reducing that balance sheet, since the central bank currently buys bonds to replace securities that are due to run off. The large balance sheet and those continued purchases are seen as key levers for the Fed in keeping policy easy.

Brenner said he expects the 10-year yield to rise above 2% in early 2022, a level that could start to worry stock market investors. As rates rose Wednesday, the Nasdaq was slightly negative while other major indexes rose, but it was slightly positive Thursday. The Nasdaq is home to growth and tech stocks that are most impacted by rising rates.

The 10-year is also key because it influences mortgage rates and other consumer and business loans.

Bond strategists say that if the equity market corrects because of rising interest rates, that in itself could put a lid on yields. When stocks sell off, investors often look for safety and buy Treasurys, driving yields lower.

Some clues on the Fed’s thinking about the balance sheet could be revealed in the minutes from its last meeting. Those minutes are due to be released next Wednesday afternoon.

AmeriVet head of U.S. rates Gregory Faranello said the bond market could test the high yields of this year fairly quickly, and he does not rule out next week. That would be the 1.75%-1.8% range on the 10-year reached in March.

“I think the pathway heading into next year should be higher rates. I’m not saying the 10-year should go to 2.50% but it’s not inconceivable we test the 2021 highs around 1.75%, 1.8% and I think we could get there quickly,” Faranello said.

Faranello said 1.5% was a psychological level, and the 10-year got a boost when it rose above the 200-day moving average at 1.48% on Tuesday. The next level was Wednesday’s 1.55%, and a break above that would take it to the high 1.60%. He noted the 10-year yield was just about 1.68% when news of the omicron variant hit the market in late November.

“We went from 1.70% down to 1.35% in the beginning of December, and we’ve been chopping, chopping since then. It seems to me we’re chopping our way back to testing high yield levels,” he said.

The move higher in yield has been even swifter at the short end. The 2-year note yield was at 0.74% Thursday, and has been at its highest levels since early 2020. That part of the curve is most impacted by Fed rate moves. 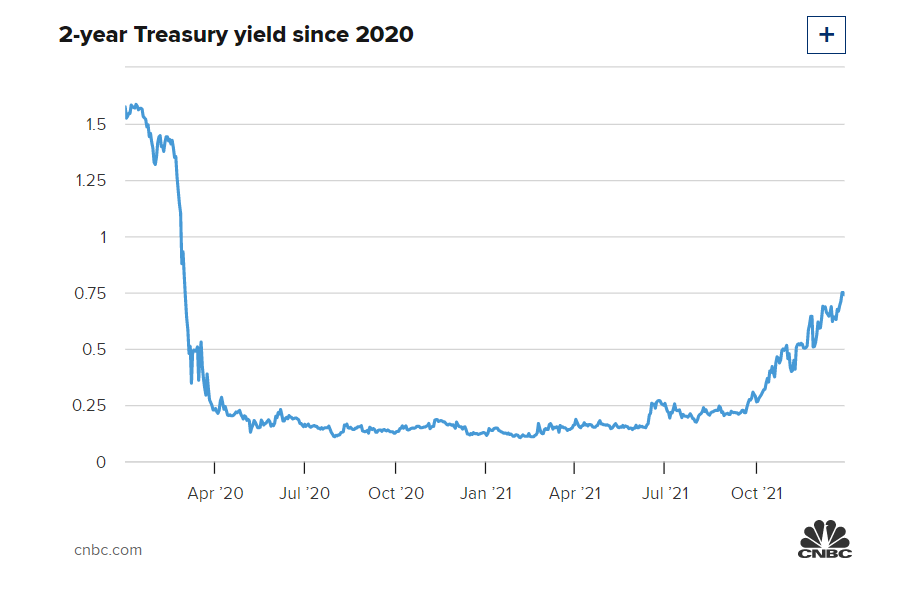 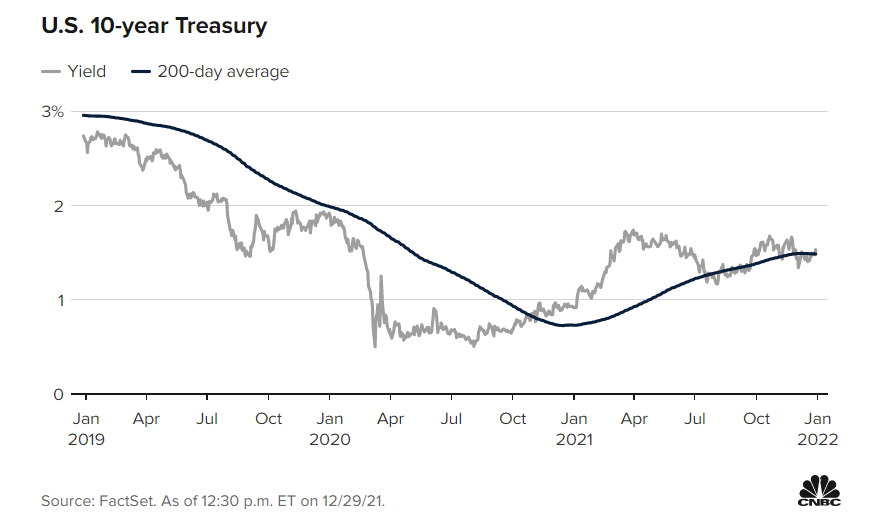 “It’s out of the bag what the Fed’s doing. I don’t see that having an impact. What will be very relevant will be the ISM data to see if there’s any relief or not with respect to prices or supplier deliveries. There is some hope now that we’re at the tail end of the holidays and we will get some relief from supply chains,” he said.

Supply chain breakdowns have been blamed for price increases and inflation across a range of industries. The Institute of Supply Management manufacturing survey is released Tuesday, and the December employment report is released Friday.

“We think it’s more of the same next year – a tight labor market, higher inflation pressures. The dialogue is around the Fed and liftoff,” said Faranello. Faranello said he expects a rush of debt issuance by corporations, looking to get ahead of the Fed’s rate hike.

Boockvar said the move in European and British rates is important since they are also signaling the tightening by other central banks. “The real tip off today is the jump in European yields,” he said on Wednesday. The negative German 10-year bund yield has risen from negative 0.38% on Dec. 13 to around negative 0.18% on Thursday.