By: Michael Mackenzie and Liz McCormick

Treasury traders are throwing down the gauntlet to a Federal Reserve that’s fallen further behind in its fight to cool the hottest inflation in four decades.

A bruising bond selloff ensued Friday, led by policy-sensitive short-term yields, after May data dashed any idea that inflation has peaked. The rout deepened when traders boosted bets on the likelihood of the Fed raising rates by three-quarters of a percentage point in July, while economists at Barclays Plc and Jefferies LLC say this move could come as early as next week.

Fed policy makers “really need to be open minded here,” said Gregory Faranello, Head of US Rates Trading and Strategy for AmeriVet Securities. “This is not yet peak inflation, and 50-basis-point hikes at every meeting this year are on the table now.”

The bond market is also sending a grim message to the central bank that their efforts to catch up with inflation will increase the prospect of an economic hard landing. The signal comes in the form of shrinking gaps between short- and long-maturity yields, including an re-inverted curve between the five- and 30-year yields.

Even in a year when daily moves of 10 basis points have become commonplace, Friday’s price action stood out and harked back to levels seen in the era of the global financial crisis. The two-year yield’s 25-basis-point advance was the most since 2009, while five-year yields exceeded the 2008 levels seen in May.

The catalyst was the Labor Department’s Consumer Price Index report, which exceeded expectations on headline and core measures.

Hot Inflation and Flagging Sentiment Up the Ante for Fed, Biden

“The inflation data is pretty disturbing — it’s broad-based, and this is how it becomes embedded in the economy,” said David Petrosinelli, senior trader at InspereX. “The market reaction is a flatter curve and that reflects the probability of more Fed rate hikes and the risk of a weaker economy.”

All eyes will be on next week’s Fed statement and Chair Jerome Powell’s post-meeting press conference, where policy makers’ characterization of inflation and long-term forecasts for the fed funds target — the so-called dot plot — will be critical.

In March, the median dot for year-end was 1.9%. Economists surveyed by Bloomberg see it rising to at 2.6%, while market-implied expectations put it at 3.2%.

The Powell Fed has been careful to telegraph policy shifts well in advance. While he pushed back against a 75 basis-point hike at the May meeting after his St. Louis Fed colleague James Bullard said that might be worth considering, Powell has not taken anything permanently off the table and has stressed the need for policy to be nimble.

The dot revisions will be guided by central bankers’ high-wire balancing act between addressing soaring inflation rates without torpedoing growth and consumer spending. Retailers are already reeling as higher prices hit customers’ wallets, with Target Corp. cutting its profit outlook for the second time in three weeks because of changes in customer buying patterns.

That said, signs of a cooling housing market as mortgage rates approach the highest levels of the past decade and a hiring slowdown in big tech have stoked speculation the Fed’s tightening cycle may prove shallow, as it did in 2018.

The only way to slow demand is through higher unemployment — and “that feels dangerous,” said said Pramod Atluri, portfolio manager at Capital Group’s Alturi. “It’s hard to thread the needle when the Fed’s tools are blunt.”

One complication noted by Deutsche Bank strategists is that the rate that’s been the best predictor of how high the Fed’s target will go — the two-year forward price of the one-year rate — has already converged with the neutral rate. That’s the rate which neither stimulates nor restrains the economy, as estimated via the five-year forward price of the five-year rate. 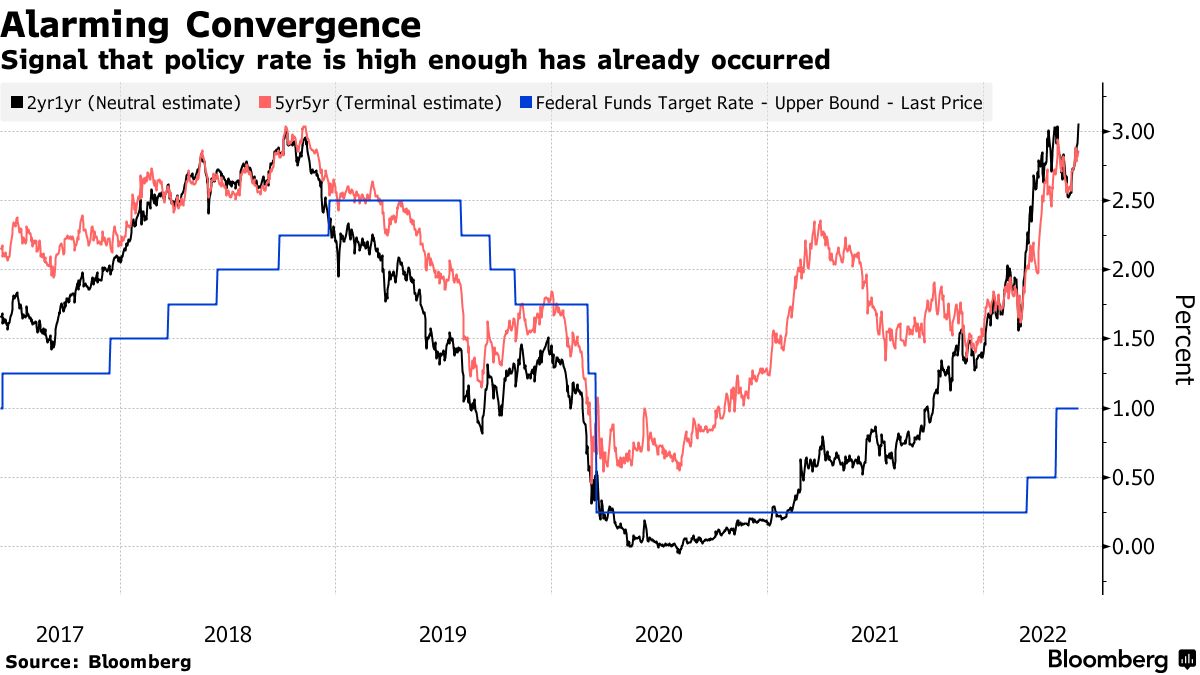 The convergence normally happens toward the end of a series of rate hikes, and it suggests further increases would be a mistake.

“At some point, as we get more data or clarity, and things fall in their place, there will have to be an agreement between the Fed and the markets,” Deutsche Bank strategists including Aleksander Kocic wrote in a June 7 note. “If inflation remains high, then the neutral rate estimate should be relatively higher. If it doesn’t, then the terminal rate should decline.”