Treasury Curve Inversion Deepens to Level Not Seen Since 2007

By: Michael Mackenzie and Elizabeth Stanton

One of the US bond market’s most widely watched indicators of potential recession risk has reached levels last seen in 2007.

The yield on the benchmark 10-year Treasury note dropped as much as 12.4 basis points below the 2-year rate, eclipsing the 9.5-basis-point gap reached in early April. The inversion shrank back to around 9 basis points after weak demand for a 10-year note auction cheapened yields in that part of the market.

So-called inversions of the yield curve — in which longer-term rates fall below those on shorter-dated maturities — are regarded as a potential harbinger of an economic slowdown that could eventually result in rate cuts. The spread between 2- and 10-year Treasuries inverted briefly in 2019 and again in April 2022.

Further inversion is likely with the Federal Reserve focused on tightening monetary policy until inflation slows, said Gregory Faranello, Head of US Rates Trading & Strategy at AmeriVet Securities. “I don’t think an inversion of -25 to -50 basis points is out of the realm of possibility and historical context,” he said. 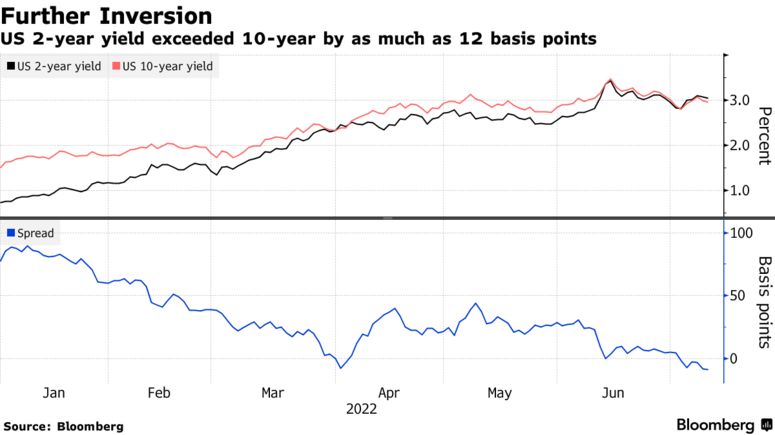 The current inversion comes amid increasing concern that measures taken by central banks worldwide to rein in inflation might end up driving the economy into recession. That fear has helped fuel a rebound in Treasury prices that’s taken the benchmark 10-year rate from around 3.5% in mid-June to a pre-auction low of 2.90% on Tuesday. Treasury yields were around 3 basis points lower on the day after the auction, with the 10-year at 2.96% and the two-year yield around 3.04%.

Other segments of the yield curve are also flattening, though several remain positive, including the gap between those on 3-month bills and 10-year notes. That spread, used by the New York Fed among others in recession-prediction models, stands at about 77 basis points, down from a multi-year high 234 basis points in May.

— With assistance by Stephen Kirkland, and William Selway