Treasury yields surged Tuesday — with several tenors rising more than 15 basis points — amid a deluge of corporate debt offerings and a stronger-than-expected gauge of service-sector activity.

About 20 companies slated bond offerings totaling an estimated $30 billion to $40 billion, pressuring Treasuries as investors flocked to an array of new issues from borrowers including Lowe’s Cos., Walmart Inc., Deere & Co. and McDonald’s Corp. Treasury yields jumped to fresh session peaks after the August ISM services index unexpectedly rose to a four-month high.

“Corporate issuance will be the driver this week,” said Gregory Faranello, head of US rates trading and strategy for AmeriVet Securities. “The issuance calendar will keep pressure on rates” ahead of inflation data next week and the Sept. 20-21 Fed meeting.

Adding to the upward pressure, the UK 10-year yield climbed past 3% for the first time since 2014 on expectations that new Prime Minister Liz Truss will boost public spending.

The selloff erased Friday’s gains sparked by August jobs data that tempered expectations for a jumbo rate hike from the Federal Reserve later this month.

Expectations for a three-quarter-point rate hike via the September meeting-dated OIS contract rose back to about 70% odds, while the March 2023 OIS climbed nearly 11 basis points to indicate a peak Fed policy rate of 3.95% for the cycle.

Still, two-year Treasury yields rose less than the 10-year, leaving the spread less inverted. The two-year yield exceeds the 10-year by about 16 basis points, the smallest amount in more than a month. The gap between two- and 30-year yields was near zero, and has steepened from an inversion around 0.3 percentage points in early August. 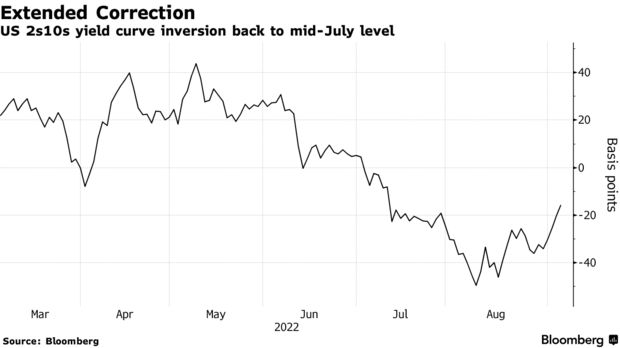 — With assistance by Elizabeth Stanton