U.S. Treasury Yields Surge to the Highest Levels Since 2019

Treasuries slumped, sending the two-, five- and 10-year yields to the highest levels since May 2019, as policy makers in the U.S. and Europe cranked up expectations for higher borrowing costs in the face of mounting inflationary pressures.

Another round of selling arrived in the early afternoon in New York after Federal Reserve Chair Jerome Powell said the central bank was prepared to “move more aggressively by raising the federal funds rate by more than 25 basis points at a meeting or meetings,” in remarks to the National Association for Business Economics. 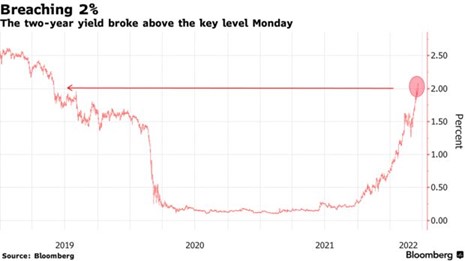 The 30-year yield rose to just shy of the peak seen last week after the Fed raised its key rate for the first time since 2018. The prospect of more corporate debt sales, including GlaxoSmithKline Plc’s seven-part $8.5 billion deal, was also seen helping push long-dated yields higher.

“We’re moving pretty quickly and seeing the two-year responding to market expectations of more rate hikes,” said Greg Faranello, head of U.S. rates trading and strategy at AmeriVet Securities. With companies seeking to lock in current rates, “the stars are aligning for a breakout higher in long-dated yields. Oil is still rising, inflation is not coming down and quantitative tightening is coming.”

Earlier on Monday, Atlanta Fed President Raphael Bostic — who favors a less aggressive approach than most of his fellow officials — said rapidly shifting events “could warrant quickly adjusting the trajectory of policy.” Two Fed officials on Friday said they would be open to raising interest rates in half percentage-point steps, pushing for more aggressive action to curb the hottest inflation in 40 years.

“Markets, in our view, are underweighting the odds that the Fed will have to deliver more hikes to bring inflation back towards its target,” Praveen Korapaty, chief global rates strategist at Goldman Sachs Group Inc., said in a note Friday.

In the euro area, Italian bonds led losses as traders piled back into bets the European Central Bank will raise interest rates to zero this year for the first time since 2014.

The ECB’s Klaas Knot said market expectations of an interest-rate increase later this year are “quite realistic,” according to an interview with Les Echos, an apparent endorsement of the more rapid pace of increases being priced in.

The messaging highlights lingering concerns over the risks to the inflation outlook, with a surge in crude oil resuming as Russia’s war in Ukraine rages on. This week offers a plethora of central bank speakers, and traders will be scouring the addresses for any signs other policy makers are turning more hawkish.

Bank of England Governor Andrew Bailey speaks at a Bank for International Settlements event on Wednesday for the first time since the central bank raised interest rates for a third successive time last week. Traders are betting that the BOE will raise the key rate to almost 2% by year-end, compared with nearly 2.25% before last week’s quarter-point hike.

Money markets are pricing two quarter-point ECB hikes in 2022, compared with less than one such increase at the start of the month, according to interest-rate swaps. The bank’s key rate stands at minus 0.5%.

Brent crude oil jumped as much as 4.8% to $113.08 per barrel. It has rallied more than 40% this year as sanctions imposed on Russia threaten to curtail global supplies.

— With assistance by Elizabeth Stanton