Municipal New Issuance: The first full week saw U.S and local governments selling more than $8 billion in bonds. The most coming from the Metropolitan Transportation Authority (MTA) selling $939.6 million competitively as well as the $650 million University of Massachusetts Building Authority split between taxable and tax-exempt bonds.

The MTA competitive deal was done in 3 parts which were won by Bank of America, Citigroup, Morgan Stanley and JP Morgan with an average spread of +60 towards MMD.

The UMass Deal, which AmeriVet Securities was a Co-manager on, was originally slated to be $570 million, but with the increase in demand for taxable bonds it was increased to $650 million with spreads tightening by only ~2bps on the taxable portion.

For the first time in three years New Jersey auctioned off $325 million in general-obligation debt. The deal was won by Morgan Stanley who had bid aggressively, paying a yield of 2.07% for bonds maturing in 20 years or 27 basis points higher than top-rated debt.

Municipal Secondary Trading:  Trading volume picked up this week as we saw $37 billion in trades an increase from the holiday shortened week. 54% of all secondary trades came from dealers selling to investors with ~$15 billion in buyers compared to ~$13 billion in sellers. 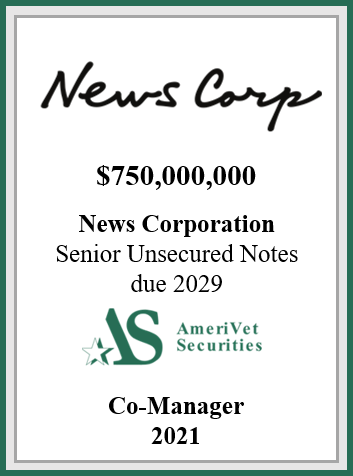 On a final note, taxable munis have been roughly 30% of new issuance for the start of the new year. Taxable munis also saw an increase of 131% on a YoY basis. This increase is due to elimination of tax-exempt advance refundings, as well as the sizable decline in rates.  According to MuniOS, the visible supply for taxable will be $3.7 billion our roughly 18% of the new issue market.