Assessing Risk in the Context of Expanding U.S.-China Competition 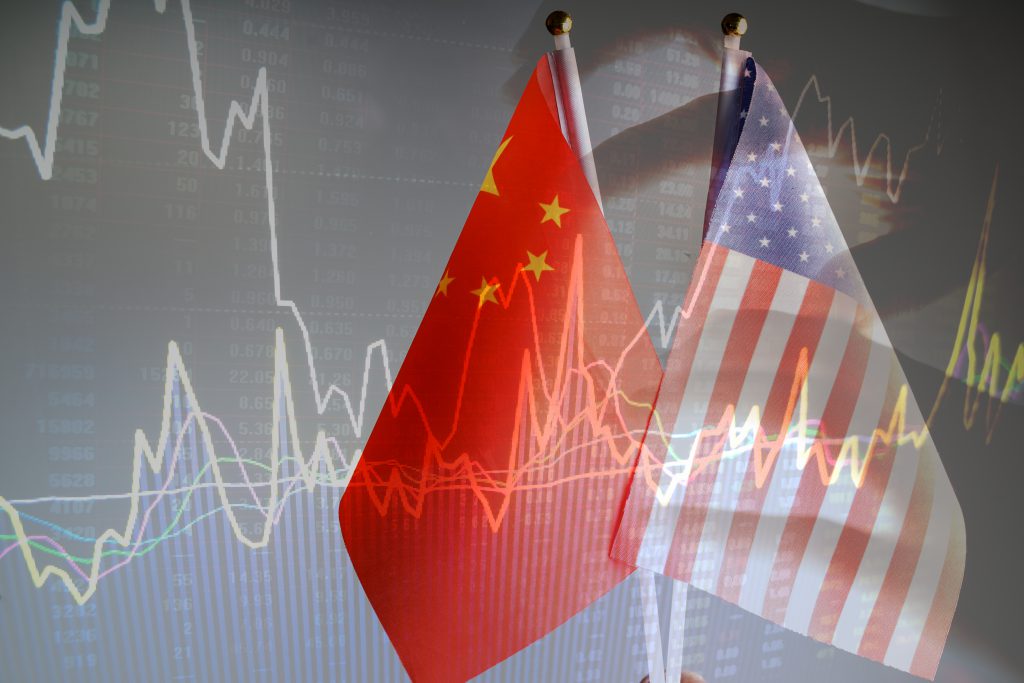 The US-China trade war received considerable media and market attention throughout 2018. And rightfully so. It has had a demonstrably deleterious effect on the Chinese economy—which did not need any additional headwinds slowing growth or undermining consumer confidence. China’s structural economic issues predate the trade war, but there is little doubt that tariffs amplified the impact of these challenges and contributed to China’s announced growth rate for 2018 of 6.6%, lowest in 28 years.

The U.S. has not escaped downsides of burdened trade with China. Market volatility and the impact of China’s sanctions on targeted industries—particularly agriculture—have impacted the U.S. economy while the overall effect of the trade war has affected business conditions across what the U.S. Department of Defense now calls the “Indo-Pacific”.

China and the U.S. are now working on what President Donald Trump has called “the biggest deal ever made” as the 90-day pause negotiated in December enters its last month. China’s take is unsurprisingly less hyperbolic, reflecting instead a cautious optimism based on a “clarified timetable and roadmap” and “constructive discussions.” Ultimately, it is in neither state’s interests—in the short or long-term—to let the three-month truce expire without a deal.

But shared mutual interest in dampening the effects of the trade war does not necessarily mean that option will be taken. Nor does an end to the trade war mean an end to the potential for economic and market disruption stemming from U.S.-China trade or geopolitical disputes.

Any effort to understand the future disruptive potential of the trade war or business and economic risks in the U.S., China, and the region must be conditioned by an understanding that the trade war is just one component of an expansive, long-term geostrategic competition playing out in and across several linked domains. The main competitive dynamic—but not only one—is between United States and China and the value systems and geopolitical objectives they claim.

Professor Xiang Songzuo, a former Chief Economist of China Agriculture Bank, captured this concept—increasingly accepted in China—of systems-based competition in a December 2018 speech at Renmin University School of Finance. Xiang noted that the trade war “is no longer a trade war, but rather a clash between two opposed value systems.” He continued, “It can be said with certainty that the Sino-U.S. relationship has come to a crossroads right now and faces significant historical challenges.”

The stakes of this competition are high and are rooted, from China’s perspective, in perceptions both of vulnerability to U.S. (and before that Western and Japanese) power and a counter-veiling ambition to achieve parity (or better) with the U.S. over the next two to three decades. China’s leadership sees a geopolitical world in transition away from a moment of unprecedented unipolarity. This transition combined with China’s economic, geopolitical, and military development offers a window of opportunity to rewrite the rules of the global geopolitical and economic order in a way that will enable China to achieve a range of critical objectives. From furthering its economic growth to increasing its global geopolitical influence to exporting its economic and political model to, most critically, ensuring the long-term security and sustainability of the Chinese Communist Party regime. The outcome of this perception over the last five years has been a growing confidence in challenging long-standing international norms and rules—think, for example, of the building and militarization of islands in the South China Sea or, in trade, restrictive and unbalanced rules governing foreign companies doing business in China.

For its part, the U.S. has arrived late to a competition that has been building for much of this young century. Too much was at stake for too many U.S. stakeholders to frame China’s behavior and boundary-pushing (both literally and figuratively) as being mainly competitive in nature: namely, China’s liberalization and integration into the global economy and corporate revenues from China’s massive market.

Over the past 18-months, though, frustration with China’s trade practices, advancing military modernization, and geopolitical assertiveness has led to a sharpening of the U.S.-China competitive dynamic. The result: more provocative policies such as the trade war and a return to direct statements from the Administration designed to build domestic and international support for a stronger stance on China. Vice President Mike Pence’s October 4, 2018 speech on China laid out the case for the U.S. upping its competitive game: “Beijing is employing a whole-of government approach, using political, economic, and military tools as well as propaganda to advance its influence and benefit its interests in the United States.”

This is a view that was also captured in the 2017 U.S. National Defense Strategy and in a January 2019 Department of Defense report on the challenges of China’s expanding influence. The latter report lays out the full scope of China’s efforts to expand its geopolitical and economic influence through measures such as its on-going military modernization, the “debt diplomacy” of the Belt and Road Initiative, 21st Century Digital Silk Road, growing defense exports, and the establishment of China’s first, but likely not last, overseas military base in Djibouti. The key take-away? The sum of China’s actions that are “out of step with international norms, diminish country sovereignty, or undermine the security of the U.S…. pose a threat to the U.S. posture”, which requires a whole of government / whole of system response.

As intense as these domain areas of competition are, perhaps the most commercially disruptive area of competition will be to develop, acquire, and protect advanced and emerging technologies, mostly associated with the Fourth Industrial Revolution (4IR).

Both the United States and China seek to gain advantage in the development of technology areas such artificial intelligence, autonomy-enabling architecture of 5G networks, advanced manufacturing, quantum computing and encryption, robotics, and smart materials and sensors, among many others. For the U.S. and China (and other states around the world), these technologies are viewed as being central to economic transformation, future military competitiveness, national security, and the ability to manage disruptive social, demographic, and political forces.

China’s steepening innovation curve in these technology areas has surprised some in the United States that had previously discounted Chinese innovation capacity. This innovation has been driven by a range of entrepreneurial forces, talent recruitment initiatives, and private capital sources. It has also benefitted from top-down central direction and funding contained in plans like ‘Made in China 2025’ and the ambitious ‘Next Generation Artificial Intelligence Development Plan’.

It has also been supported by wide-spread and directed theft off and creative use of licit means to acquire U.S. and Western technologies. The strategic risks of China’s technology acquisition effort have long been known and of concern to the U.S. defense and intelligence communities. The Obama Administration issued a “name-and-shame” indictment of five People’s Liberation Army cyber warriors in 2014, in part, stimulating a 2015 agreement to cooperate on cyber crime issues.

The U.S. intelligence community believes China has not abided by this agreement and has, in fact, accelerated its technology theft and acquisition efforts to capitalize on global 4IR innovation. FBI Director Christopher Wray asserted in July 2018 that “China, from a counterintelligence perspective represents the broadest, most pervasive, most threating challenge we face as country”. Wray’s assessment now buttresses an aggressive Department of Justice response. One of the more visible components of that response was the December 2018 indictment of two Chinese hackers who were suspected of being part of a Chinese group known as Advanced Persistent Threat 10 (APT-10).

The indictment noted that from at least 2006 – 2018, these two individuals had “conducted extensive campaigns of global intrusions into computer systems aiming to steal, among other data, intellectual property and confidential business and technological information from more than at least 45 commercial and defense technology companies in at least a dozen states” as well as government entities.

And the U.S. is not the only country expressing disquiet on this issue. The indictment also listed 11 other countries targeted by the indicted individuals and APT-10. Many of these named countries made statements of their own regarding China’s technology theft similar to that made by UK Foreign Secretary Jeremy Hunt: “These activities must stop. Our message to governments prepared to enable these activities is clear: together with our allies, we will expose your actions.” Some are also reconsidering their commercial engagement with Chinese high-tech companies—particularly Huawei—that are suspected of being an important cog in the wheel of China’s surreptitious acquisition of sensitive technologies. Poland, for example, arrested two Huawei executives on suspicions of technology theft and is reportedly set to exclude Huawei from future 5G network plans.

Two forces are further complicating what is already proving a difficult competition to predict outcomes and implications of. First, while the U.S.-China dynamic is central to the future of the competition, it is not the only one that matters. States across the Indo-Pacific have core national security and economic interests in play as well as different types of relationships and levels of engagement with the United States and China. There are fewer of the ‘clean line-ups’ of alignments across the region (and beyond) that, generally, marked Cold War competition. Some governments may respond to economic disruption or crisis in ways that have to balance competing economic or geopolitical interests and may be difficult to predict as a result. The same could be true of commercial entities that have integrated into U.S. and Chinese company supply chains.

Second, the dimensions of competition discussed above—trade, technology, military modernization, soft-power expansion, territorial disputes, defense export competition—are not individual and disconnected silos. They are connected—in some cases robustly—meaning both that crises that start in one domain can (very) quickly radiate out and affect others and that negotiations in one area will almost certainly be affected by broader competitive priorities of the U.S., China, and, on occasion, other states. For example, in December of 2018, the U.S. Department of the Treasury reportedly thwarted the U.S. Department of Justice from imposing sanctions on China for its purported technology theft due to concerns that sanctions would undermine trade war negotiations at a particularly sensitive time. In this case, interconnectivity had a de-escalatory effect. That will not always be the case. Indeed, at around the same time, the U.S. asked for Canada’s help in detaining a Huawei executive suspecting of violating U.S. law. The move soon led to the detention of three Canadians in China otherwise disconnected from the controversy.

Ultimately, the economic and geopolitical environment across the Indo-Pacific is moving into a new and risk-burdened phase that will be prone to fast-moving disruptions and escalations stemming from this competition. This does not mean, of course, that the world is headed into a new Cold War. Past need not be prologue here.

Competitive co-existence in which China and the U.S. pursue competitive strategies to establish and maintain advantage while still maintaining economic engagement and occasional geopolitical cooperation is a far more likely outcome. Engagement and cooperation will, of course, be welcomed, but it will also enable both actors to expand the competitive space horizontally in clever and difficult to anticipate ways. Lian Ping, Chief Economist of China’s Bank of Communications, China’s fifth largest lender, succinctly captured the new reality in comments to the South China Morning Post in December of 2018, “It’s not a matter whether there will be a fight between the countries, but how they will fight” during this period of “significant historical challenges.”