Benchmark 10-year Treasury yields fell as much as 7 basis points to 1.73% and were on course for their biggest one-day drop this year after the tech-heavy Nasdaq 100 Index moved into correction territory. But Australian bonds were the runaway leaders, with 10-year benchmark borrowing costs dropping as much as 9 basis points to 1.90%. German peers slid to a one week low at minus 0.07% just two days after turning positive for the first time since May 2019. 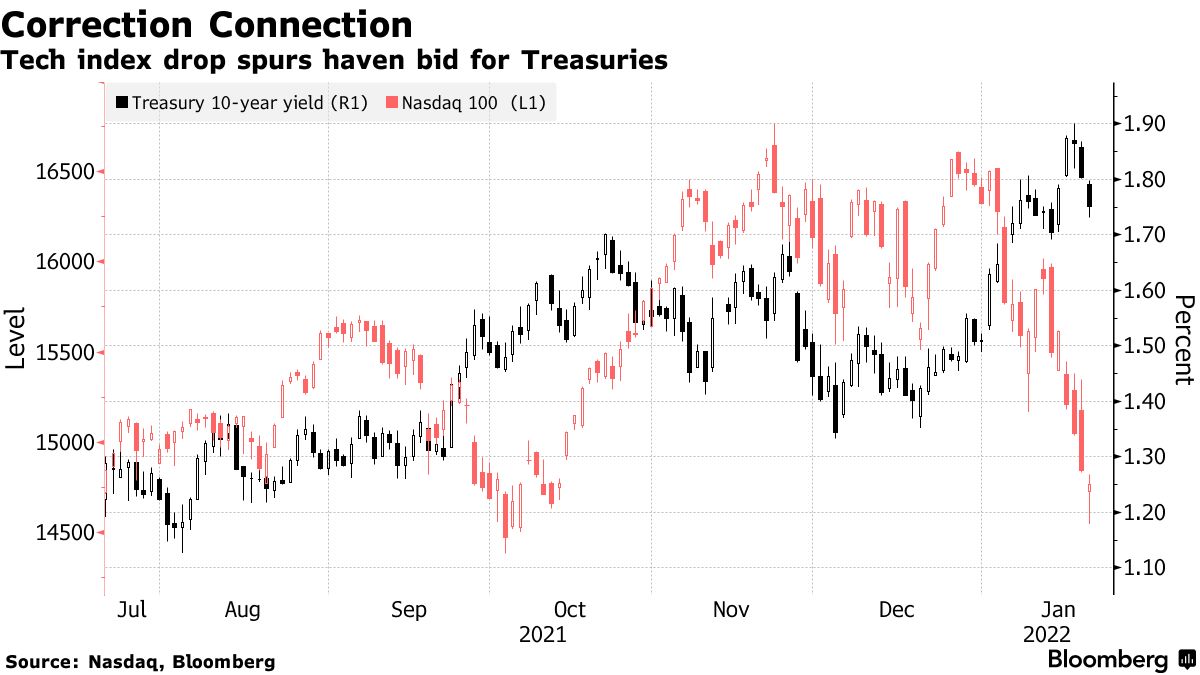 Global shares dove amid increased risk aversion, with the S&P 500 down for a fourth straight day, and bank shares falling steeply this week after earnings highlighted cost rising pressures for blue chip lenders. Meanwhile, the yen climbed and the dollar strengthened against some of its major peers. The pound was among the decliners against the greenback after U.K. retail sales plummeted in December.

“The Treasury market is reacting to equities; we saw an ugly close for European equities and the Nasdaq is down 10% plus this year,” said Gregory Faranello, head of U.S. rates trading at AmeriVet Securities. “Treasuries have repriced sharply higher this year and now they are are providing some offset to declining equities.” He added: “Heading into the Fed meeting next week, the 10-year at 1.75% is a market that looks better balanced.”

The 30-year bond yield fell 4.5 basis points to 2.07% and extended its retreat from Tuesday’s peak of 2.20% as equities remained under pressure. Portfolio managers tend to hold long-dated Treasuries to help offset periods of stumbling equity performance.

The rally is “a function of stretched investor positioning and some global risk-off due to continuing U.S.-Russia tensions around Ukraine, and as reflected in sharply weaker equity markets,” said Andrew Ticehurst, a rates strategist at Nomura Inc.

Global bonds are on track for their worst January since 2009, as speculation builds that the Federal Reserve could deliver more than a quarter-percentage point rate hike in March and then move to trim its balance sheet. But riskier assets have stumbled too as investors shifted out of expensive growth stocks with U.S. benchmarks bearing the brunt of the selloff.

Meanwhile, tensions over Ukraine are ramping up as top U.S. and Russian diplomats met in Geneva Friday to discuss the standoff with little clear progress made but an agreement to keep talking. U.S. President Joe Biden said Russia will “pay a heavy price” if any of its forces move across the border into Ukraine after earlier suggesting Western allies might struggle to react to a small-scale attack.

Volatility that has gripped markets this month has shown little sign of letting up, as the S&P 500 heads for its worst, albeit short, week since October 2020. A buy-the-dip rally on Thursday reversed late in the session, dashing hopes the equity market would show signs of stabilizing.

Profit Taking
Still, there were signs in U.S. trading Thursday that some traders were closing bearish option positions on Treasuries to take profit. Activity was elevated in a key put contract that some flagged as a potential trigger for fresh yield surges.

“From here, we look for a consolidation in Treasuries, but with a mild upward bias to yields as expectations for rate hikes and sustained growth remain,” wrote OCBC Bank strategists Frances Cheung and Terence Wu in a note Friday.