The Iowa Democratic presidential caucus could be a wake-up call for the stock market.

If Sen. Bernie Sanders of Vermont wins Monday?s first presidential contest of the 2020 campaign, markets could see a new wave of volatility, particularly if the left-leaning candidate then goes on to capture New Hampshire?s primary the following week.

Sanders had once been seen as a long shot, but he is now leading former Vice President Joseph Biden in Iowa polls by an average 24.8% to 20.6%, according to?RealClearPolitics.com.?Sanders is also leading Biden by an average 8 points in polls in his neighboring state of New Hampshire, which he won against Hilary Clinton in 2016. The New Hampshire primary is Feb. 11.

?Anybody who has won two of the first three, they?ve all gone on? to be the nominee, said Daniel Clifton, head of policy research at Strategas.

Biden is leading in the third and fourth states to hold votes. He leads by 5.7 percentage points on average in Nevada polls ahead of its Democratic presidential caucus Feb. 22, and is ahead in the Feb. 29 vote in South Carolina, where?RealClearPolitics.com?puts him up by an average 17 percentage points.

?Iowa has picked the last four Democratic nominees. The early states, which are often disregarded as not important, create momentum for winners and really start to hurt the losers,? Clifton said.

This year, there is an early ?Super Tuesday? of primaries on March 3 in more than a dozen states, including Texas, North Carolina and California, a key state where Sanders now has a large lead. Those states hold 42% of the delegates, but Clifton said Iowa can be pivotal and provide important early momentum for candidates. He said the next precaucus poll on Saturday by the?Des Moines Register will be important.

?This is why the volatility is around February, and not March. Super Tuesday has many investors making that bet,? he said. ?They?re betting on March. You want to make your bet around February because there?s a lack of realization that Bernie could win the nomination, and he?s going to get a fresh bout of momentum if he wins those first states.?

Investors have been betting on high volatility around the run-up to the November election, and October futures for the Cboe?s Volatility index are sharply higher than other months.

Sanders? recent run-up in the polls has rattled some investors, who favor President Donald Trump?s policies and have been hoping he will remain in office. Wall Street has feared Democratic policies that could roll back some of the Republican tax breaks to companies and individuals.

Sanders and Sen. Elizabeth Warren are the most progressive and both favor ?Medicare for All.? Both also would ban fracking, or the shale drilling that has taken the U.S. from a major importer of oil to an exporter and the biggest producer in the world.

Biden wants to preserve and expand upon Obamacare, with a private insurance option. He has also supported fracking, which is important to voters in key states such as Pennsylvania and Texas.

In Monday?s stock market sell-off, the decline was mostly blamed on worries about the outbreak of coronavirus, but some analysts said investors were also spooked by the latest polls showing Sanders rising in Iowa.

Stocks rallied Tuesday and Wednesday, but markets are now clearly keeping an eye on the election, against the backdrop of Trump?s impeachment trial in the Senate. It is expected the Senate will acquit him, but the proceedings could drag out if witnesses are introduced. Biden risks being tarnished by that, too, because of his son?s involvement with a Ukraine gas company while he was vice president.

The election is not top of mind in the bond market, as the Fed meets Wednesday. Fears the coronavirus could hit the economy have driven yields sharply lower, as investors bought Treasurys for safety. The election uncertainty is expected to increase with the Iowa vote, and some bond pros see that as a reason for caution.

But the market?s main fear is that either Sanders or Warren wins the Democratic nomination because there then is a chance that one of the most progressive candidates could win the election.

?Their policies are clearly not pro-market. Regardless of what the odds might be in the general election, they have a puncher?s chance,? said QMA chief market strategist Ed Keon.

In the Iowa polls, Warren is fourth with 14.6%, behind former South Bend, Ind. Mayor Pete Buttigieg, at 17%, according to RealClearPolitics.com. Minnesota Sen. Amy Klobuchar is averaging 9% in Iowa?s polls.

Former New York Mayor Michael Bloomberg is not in the early state races, and only shows up in time for Super Tuesday. Some strategists see Bloomberg siphoning off Biden supporters, helping Sanders.

?Bloomberg has set up for Bernie winning and Biden crashing. If that scenario takes place, then it would be him and Bernie Sanders one on one in the back end of the states. It?s never been done. It wouldn?t be easy. He?s getting 7% of the vote right now,? Clifton said. ?But he?s the only one increasing in the polls.?

Cornerstone Macro?s Andy Laperriere said even though Sanders looks to be in the lead in Iowa, the situation is fluid and it?s hard to tell what the outcome will be. ?What looks like is happening is the progressive vote is coalescing around Sanders and feeling like he?s got at least as good a chance as anybody else,? said Laperriere, who heads U.S. policy at Cornerstone.

Laperriere said an analysis on?FiveThirtyEight Politics?shows a win in Iowa could give a big boost to either candidate but would push Biden closer to being the nominee. The analysis shows Biden doubling his odds to 80%, while the odds for Sanders would get a boost to 61% on an Iowa win.

?I think investor perceptions will do something similar to that. The market will be shifting its odds pretty dramatically about who will be the Democratic nominee,? Laperriere said. ?Sanders is much more of a risk to the market, but on the other hand, the perception is the odds of him beating Trump are low. Biden is less of a risk for the market, but the odds of him beating Trump are higher.?

Tom Block, Washington analyst at Fundstrat, said Iowa could determine which of party?s progressive candidates will be left standing.

?It appears Sanders is gaining momentum, and Elizabeth Warren is losing momentum. I think Iowa can be the defining moment for the race within the race,? he said. ?If Joe Biden gets wiped out in Iowa that would be a negative for him, but if he?s competitive and they all bunch together, I think he can survive for another day.?

Block said Bloomberg only comes in to the race seriously if Biden falters. Markets see the billionaire Bloomberg as much more market friendly than Sanders or Warren.

?The landscape has significantly changed. You never before had a Super Tuesday like this that has California, Texas and North Carolina. History is changing with this year?s primary schedule,? Block said. ?I think the biggest outcome of these early first primaries is going to be deciding whether Bernie has captured the progressive vote, and what is Elizabeth Warren?s argument for staying in the race.?

Investors may find Sanders? tax proposals less appealing than those of Warren. According to Cornerstone Macro?s analysis, Sanders would push the highest individual tax rate to 52% while other Democrats would raise it to 39.6%, from the current 37%. Under Sanders? plan, the highest marginal tax rate would be 69.2%, compared with Warren?s 53.5%. 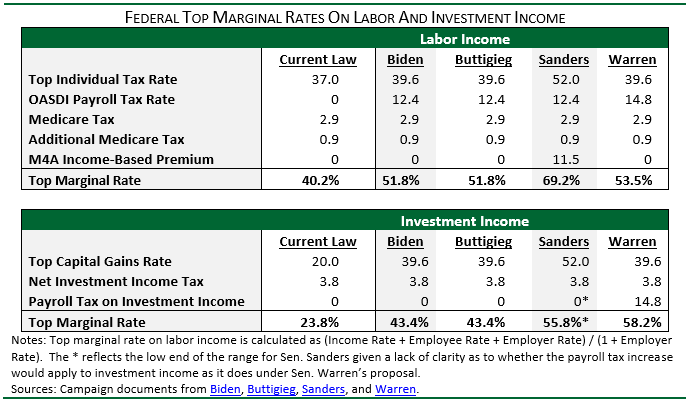 Earlier in the race, health-care stocks fell as Warren gained momentum, but they started to recover as she peaked in the polls. Lately, managed-care stocks have been underperforming, seemingly in a response to Sanders gaining momentum, Clifton said. The FANG tech names, banks and energy stocks are also viewed as vulnerable to Sanders.

If Sanders wins Iowa, there could be a knee-jerk reaction in stocks, but it may not be big initially. If he continues to win, volatility is expected to increase.

?Volatility here in general should start to pick up,? said Gregory Faranello, head of U.S. rates at AmeriVet Securities. ?If Sanders starts to emerge, coming out of Iowa, I think the market will be forced to price in a certain percentage of likelihood that he could win the general election. I think it starts to handicap that this is real.?