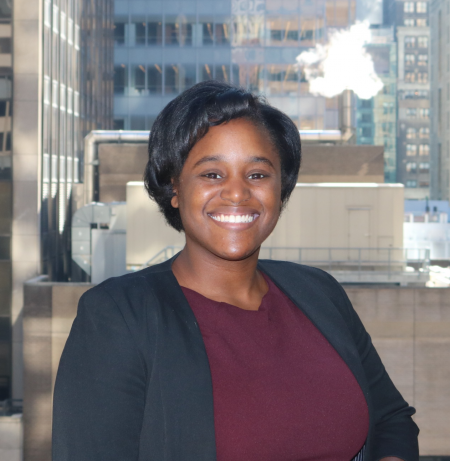 Sidney Covington serves as our Veteran Engagement Associate. She is a Chicagoland native and U.S. Army veteran.

Ms. Covington enlisted in the U.S. Army in 2011 as a Health Care Specialist, also known as a medic, where she learned to expertly utilize both basic and advanced medical skills.

Ms. Covington earned the title of combat medic through her deployment to Afghanistan in November of 2011, where she worked as the night shift head medic.

In addition to her military service, she most recently worked as a trainer with the Posse Veterans Program, where she assisted transitioning service members and veterans in attending top-tier colleges and universities.

Ms. Covington also served as the Constituent Liaison for Military and Veterans Affairs in Senator Gillibrand’s office where she spearheaded veteran’s outreach for the state of New York and assisted in the U.S. Service Academy nomination process.

Shortly after her tour in Afghanistan, Ms. Covington decided to go back to school to earn her Bachelor of Social Work from Georgia State University. Later, she attended New York University for her Master of Social Work. Sidney also currently holds her License of Social Work in both New York and Illinois.