Treasury Yields Jolted From Highs on Prospect of Fed Letup

The Treasury market was upended Friday by a surge in wagers that circumstances will allow Federal Reserve to slow its pace of rate increases as early as year-end.

Yields across the spectrum rose to new multiyear highs in early trading on the prospect of unrelenting Fed rate increases to control inflation. That was followed by a violent reversal in short-dated yields as that outlook was undercut, in part by comments by San Francisco Fed President Mary Daly, who said it’ll be necessary for the central bank to decrease the size of its rate increases, to 50 or 25 basis points, without specifying when.

The move was most pronounced in the five-year sector, where yields rose as much as six basis points to 4.504%, the highest level since 2007, then sank nearly to 4.30%. The reversal in short-dated Treasuries was accompanied by traders slashing the expected Fed policy rate peak in 2023 — which had exceeded 5% on Thursday — to back under 4.9%.

The move was already under way before Daly spoke, sparked by a Wall Street Journal report that some Fed officials are concerned about overtightening. The central bank has raised the policy rate by three percentage points since March, with another three-quarter-point increase anticipated next month. The article said policy makers are also likely to debate whether to signal that a smaller hike is possible in December. 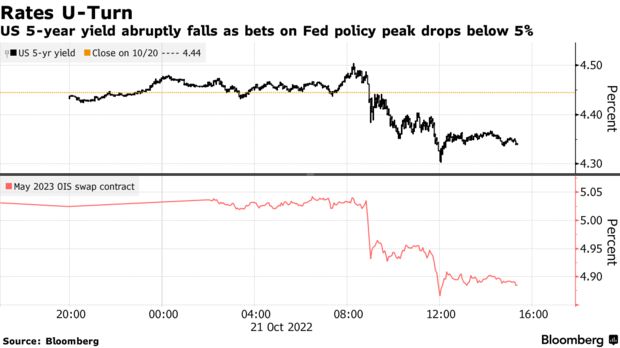 The difference between market wagers on the peak policy rate and what the Fed has signaled exposes the bond market to further big swings, said Gregory Faranello, Head of US Rates Trading & Strategy at AmeriVet Securities.

“The Fed has signaled wanting to get in and around 4.75% and pausing, while we have a market terminal rate priced close to 5%,” Faranello said. “A likely scenario is a slower pathway following the November meeting,” which explains today’s price action, he added. “Liquidity issues also favor more volatile rate trading as banks pull away to lighten up their balance sheets before year-end.”

The reversal in short-dated yields while 30-year rates remained near session highs disrupted the powerful curve-flattening trend that has dominated the market over the past 18 months as the Fed’s hiking cycle was anticipated.

Two-year yields, which in the past month have reached levels nearly 60 basis points higher than 10-year yields, declined to within 25 basis points. The curve steepened as much as 13.4 basis points, the largest intra-daily shift since February 2021. The 19-basis-point steepening in the 5- to 30-year spread was the biggest one-day shift since March 2020.

While the 10-year Treasury yield was a touch lower late in New York after carving out a 14-basis-point swing for the session, the benchmark was on course for a 12th-straight weekly loss, the longest streak since 1984, when then-Federal Reserve Chairman Paul Volcker was carrying out a series of rapid rate hikes.

The US bond market selloff is part of a global repricing of fixed-income risk as most central bank are engaged in tightening financial conditions. German bonds capped a record 12-week losing streak.

“The bond market has lost confidence that inflation will naturally come down,” said Rob Waldner, chief fixed income strategist at Invesco. “We think bond yields are in the process of overshooting. Volatility will stay high as there is no clear indicator for the Fed to stop.”